Go to: http://www.bbsradio.com/asyouwish/ it is on station 1 and will only air live sat night... the archives are for BBS members only…. it will also be going on "you tube" later.


Message Update from Victoria
(to watch Victoria's 6 video clips on You Tube click on link below)
http://www.victoriaslight.com/video.htm

3. Messages from Victoria and Transmissions from
The Brotherhood of Light

5. Signs and Symptoms of Transmutation

Like many of us, I have had an interesting and challenging 9 months, thus I have been out of touch with you all, but you are always in my prayers. A couple of brushes with Death, now, I am FINALLY FEELING LIKE MYSELF AGAIN…and getting my groove back energetically. Many of us are doing these temporary death dances, so we can then move to an even higher frequency and vibration. I look at these moments as gifts to help us grow.

The Universe has blessed me to open a New Healing Center here in Beautiful Pagosa Springs, Colorado where I can serve and assist individuals in so many ways on their healing journey. "Top of the World Rejuvenation, Healing & Massage Center".

Services offered: As a therapist, I specialize in clinical Hypnosis for healing the emotional body, relationships, overcoming addiction, and just clearing up the mind for new joy. As a conduit of light, I administer to the very sick with catastrophic illness. Offering 3-5 Day Rejuvenating and Detoxification Retreats.

Also available by phone or in person: intuitive consultations can lead to deep
healing emotionally, as well as accessing new direction for goals and wholeness.
Call 970-731-1641 to schedule a visit or phone call or email victoria@victoriaslight.com

Everyone, please keep focusing on dreams that you have...as these desires will follow you into the New Earth.


Temporary Death Dance for many of us!

I believe that many are experiencing a death dance which is not really death, but you feel like you about to give up and throw in the towel…..but hold on Nellie!!! We just have to stay in the moment to moment place of JUST BEING…and trust that our bodies are trans-mutating so we can thrive in the higher densities.


Messages from Victoria and Transmissions from the Brotherhood of Light:

On the night of (Feb. 12) I was up all night filming the Light ships, which were very low hovering over the lake off my deck. Repeatedly, they reveal within the vehicle, images of people dressed in white moving about their activities. It is so fascinating!

There is also an intense vibration radiating from the vehicle, (filming using a tripod), the movement almost makes me dizzy while filming. I have mentioned this in other emails that I sense the vibration is symbolic to the higher vibration frequencies we are experiencing.

This summer, the ships were appearing two at a time …One was vibrating so intensely demonstrating moving up, down and spinning at a much higher speed than usual. I believe they were communicating that humanity is indeed spinning higher with the acceleration of the an expanded consciousness moving to the next level The other ship was a cigar ship with windows…just watching the vibration.

Has everyone been feeling dizzy since Feb. 12th? The intensifying earth changes, and the electromatic force field around our planet has magnified to such a degree that we don't really feel like we are in our bodies anymore…And maybe we are not in our old earth suit, but experiencing more of our light body.

I feel inspired to share some visions I had this past Dec. 2010 (which have profound meaning)

On Christmas Eve, in a vision I was conversing with a friend, expressing the great fatigue I felt in my physical body… then I proceeded to walk through the snow and Cold (which we all have been seeing around the U.S. and the rest of World thru the Arctic Chill).

As I walked, I then laid my body down in the snow. A part of me watched my body lay there, and I witnessed my spirit floating up to Heaven. The interesting thing was there was a 3rd part of me, still very present and continued on in conversations with others. I believe this 3rd part was my Transmuted Light Body!!

Vision of August 31, 1997: I was shown seeing myself OPENING THE SHUTTERS and looking out and seeing the same streets (but clean from evil and sadness)…like waking up and the world had made the shift.

I believe this vision has given me the strength to endure my journey
over the last year. There were many times when I just wanted to leave this dimension as my physical challenges were very difficult.

I know in my heart that one of these days, we will wake up into that world and continue on...AND WE WILL NOT REMEMBER THE "BOOT CAMP" of this 3rd dimensional World we are leaving behind. Our memory will be only focused on THOSE PRECIOUS GEMS OF LIFE and RELATIONSHIPS which will continue with us in our hearts and we shall begin creating new joy, complete security, unlimited abilities to manifest merely through our thoughts.

WE ARE GOING THROUGH THIS TRANSMUTATION NOW AT AN
ACCELERATED SPEED.

1. Our ability to communicate had become very strange. We are thinking one thing, but other words slip out!

What does this transposed verbiage mean?

We are moving out of the 3rd dimension communication and perhaps putting the computer on the person's back represents transfiguring our skeletal structure INTO THE CRYSTALINE STRUCTURE. Does that make sense? It sure does to me.

2. We are letting go of worrying about the way we use to do things, or the major productivity of our personal tasks… We are now starting to produce THROUGH OUR thought forms and not so much with physical effort.

3. The flu and illness that many are experiencing right now is more than flu, but it is part of our transmutation. The need to sleep, rest, recover is an integral part of surrendering and allowing this change in our Light Bodies to settle in.

4. Stepping our of the mind control of the world we have been living in.
Don't let the bad guys manipulate our well being and choices. We have seen this now with the Grand Activation of the People of Egypt. It is truly profound this initiation is once again beginning in a land of our ancient history. Humanity must take control of their journey, empowerment, joy, and the ability to manifest now through Mass Consciousness!!

5. Teleportation - We are doing so much while we sleep. I have found that I am many nights going to the 2nd Earth and I am engaged in large gatherings in auditoriums, red carpets, marble floors, crystal cities with many level and various events, clinics, housing, pools, transporter garages. Does this sound familiar to you? Many times I will recognize someone here in this dimension as the same person I just saw last night on the ship…only dressed different (of course).

Over the last year, it has been a time of great changes, some tragedies for the various countries as Haiti, Chile, Ecuador, China and many people are leaving the planet whose bodies cannot adjust to the higher frequencies.

These are the signs of moving out of this present dimension and into the NEW REALITY. Those of you, who have known me for years, remember I have been expressing the 2nd Earth Concept since 1997 after having 3 visions regarding this.

The truth that rings through me every night telepathically, is that we are to Live, breath, thrive in Higher vibration on this 2nd Earth (Parallel Earth)… even with our sweet pets who will be with us!! WHEN ALL OF THE BIRDS, SEA LIFE, BEGAN DYING THE FIRST WEEK IN JANUARY, regardless of the explanation given to us by various people, I believe that this wild life is transplanting onto the 2nd Earth, awaiting our arrival.

At this time, it is wise to be frugal and sustain yourself until we complete this shift. Be aware that the banking system is going to come to a screeching halt with no warning (a person visiting with a friend working at a bank was told "The banks are going to Close".

The interest rates are climbing out of site …do not play their games. We all have tried to stay up with the game to keep good credit, but soon that credit will mean nothing and there may be debt forgiveness.

Follow YOUR Truth. Listen within….and trust what you feel in your heart and move forward accordingly.

It is a feeling of being 2 weeks from graduating from high school…you are nostalgic and we not quite sure what lies ahead, but the Brotherhood of Light assure me WE WILL LIKE OUR NEW EARTH which has been a hologram i.e. parallel world. When we make this shift, we will INHERIT THE EARTH WE WERE PROMISED. THE old Earth we have been on has been the illusion, and we shall soon experience the REAL EARTH, which is Pure and Pristine.

The watchers…may be left behind, those who have laughed and mocked us…as we have been awake all along…we have been prepared to be the initiators of the NEW 2ND EARTH. The precious children who are teaching us, healing, an 8 yr old advising, with amazing wisdom, a 30 yr old.

For those who are living in areas of danger, just be prepared the best that you can…mentally, spiritually, emotionally, and positively.

The areas shown on the maps indicating land masses missing… are actually showing the land that ASCENDS onto the 2nd Earth. So instead of feeling all the land is sinking on this earth… VISUALIZE THAT YOUR AREA WILL ASCEND ON THE 2ND EARTH…REGARDLESS OF WHERE YOU ARE LIVING NOW…SEE IT…CREATE IT.

Those people who do not appear to be in synch with making the shift…judge not…and we may be surprised who goes and who does not.

Stay in the LOVE, CHRIST LIGHT CONSCIOUSNESS, and INNER PEACE.

WE ARE ALMOST HOME….ANY MINUTE, any week…and not too far in the future.

My blessings, love, appreciation to you all who have hung in there me all the years through emails, I thank you so very much. You truly are my family!!! 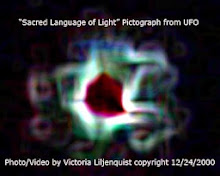 Sacred Language of Light Appears to us through the Merkabah Light Ships. This Photo was extracted from Live Video Footage. So Beautiful! We are activated through our Third Eye when witnessing the Pictorgraphs. Visit www.victoriaslight.com/videos/ and www.victoriaslight.com/store. Explore more photos of my amazing journey since 1994.
Many thanks for your contributions to support the message and efforts of "The Program of Victory Tour" and "Preparing for the New Earth". In gratitude & love, Victoria